The Story of the 4 Minute Mile 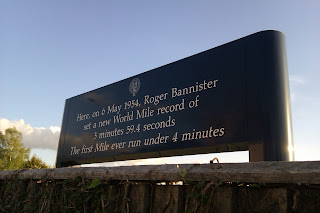 However ordinary each of us may seem, we are all in some way special and can do things that are extraordinary, perhaps until then even thought impossible.

Thus starts Roger Bannister’s charmingly modest account of his historic achievement The First Four Minutes, the basis for an unforgettable Oxford Playhouse promenade performance (if that’s the term for such a pacy production).

And neatly structured to match the four circuits which make a mile run, the setting is the very track where history was made nearly sixty years ago.

Our first lap takes us to a childhood of bomb-damage and rationing in 1950s Oxford.  But the injury was deeper – we were a limping, fading power, fondly looking back at our colonial peak on the world’s podium.  But for our narrator Michael, glued to dancehall on his new wireless, only one thing mattered – and it sure wasn’t someone trying to die by running a mile in under four minutes.  He went courting in Shotover Park and missed the whole thing!

The second circuit evoked the excitement of the day itself – Jack’s radio commentary breathlessly ran through the ever-tightening race to break the elusive barrier.  But as the Bannister character dipped in and out, it was soon apparent that even such a seemingly personal achievement was actually a team effort, relying heavily on the pace-making skills of fellow runners.

Our third time round brought us to the present day, with Mara preparing us for this country's greatest ever sporting event, the London Olympics this August (more of which in later blogs!).  An intense contrast with Bannister - new black and female, she also represented the frustrated ambition of most professional athletes, an anathema to the ‘amateur’ Bannister, who wanted to be remembered for his contributions to neurology.

But what of the all-important fourth lap?  A nice twist - we got to run it ourselves!  There was no ash track or hard leather spikes to slow me, but I still took 1 minute 14 seconds to run a single lap.  At least a late sprint gave me the honour of heading the pack (and painful elbows to this day).

I came out buzzing – impassioned by the inspiring story, and the message that if only we try hard enough, we too might achieve what seems impossible.

Yet as I got my breath back in my new house just 4 minutes stroll up Iffley Road, I wondered if the story could be just that - a myth?
Google ‘four minute mile’ and you’ll find beautifully understated BBC archive footage.  Surprisingly though, you won’t find much else on the athletic achievement – today’s appreciation comes from life coaches, management gurus and motivational speakers.  Airports full of self-help books now try to universalize his feat (and feet).
Their theme is that it was Bannister’s power of positive thinking that led him to break his barrier – and you too can achieve your dream, as long as you have faith!
The story goes that everyone at the time believed a sub-four minute mile was impossible, or at least lethal.  Yet as soon as Bannister did it, others quickly followed.  You see, it was possible all along, it just needed him to show it, and then the barriers tumbled.
Convincing – but actually nonsense.  From his own candid account, it is clear Bannister was no spiritual dreamer.  His efforts owe more to natural physique, hard-headed application of physiology and a specific strategy for training and pacing – plus a dose of good fortune with the weather, with the wind dropping just before the race.
Neither was he alone - Bannister’s rivals were equally convinced the barrier could be broken - this was simply a race to be first.
The fact that people only succeeded after him is tautological - if he got there first, by definition others could only follow.  What’s more, both minutes and miles are totally arbitrary – if they happened to be defined differently, someone else would have arrived first at whatever alternative but equally artificial record was set.
So, sadly, I have to conclude that the magic of the four minute mile is something of a fable.

But even without the mysticism, I don’t doubt the achievement - Bannister’s triumph nearly 60 years ago at the running track I pass every day was truly momentous.  Let’s hope the spirit of this great man will be remembered as the records tumble this summer.